The wrong one. Every trainers nightmare

27-July-2017
27-July-2017 18:36
in General
by Admin
Every trainers have nightmares, mine is that I get to the races, need forty winks but fail to wake up in time to saddle an intended runner. I have never done it but I refuse to make fun of those who do such things. Glass houses and all that.
Sometimes we hear of the wrong horse being taken to the track, its probably easily done on a big yard although my yard has never been that big! Some years back one small trainer saddled an older horse in a two year old race at Hamilton only to realise the error as they were about to load the stalls, luckily for the trainer he was young and fit enough to sprint in to the stewards room and alert them.
Today at Yarmouth however the trainer, Newmarket based Charlie McBride saddled his three year old filly who did indeed take the place of his two year old filly in juvenile race and "won" at odds of 50/1.
Poor Charlie he will be hounded for a while by nightmares of the kind suffered while you are both awake and asleep. Specsavers will have already been put on full alert and they might even make a new advert for the telly but seriously the poor lad, there is NO WAY in the world this was done intentionally.
Anyone with half a brain can tell you that. Firstly, as a licensed trainer answerable to the BHA he won't want to be seen doing anything "wrong". Secondly, he knows he would be caught out - so why bother, thirdly the only reason a dodgy person would do such a thing would be for the money and, with odds of 50/1 it is abundantly clear that gambling was not involved either. 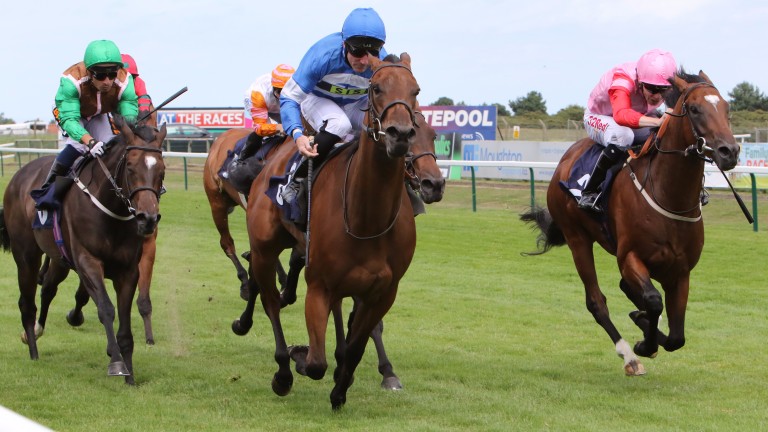 Millie's Kiss (blue cap), running in the name of stablemate Mandarin Princess, wins the opener at Yarmouth from 4-6 favourite Fyre Cay
The burning question is, "why did it take two hours before this was discovered?" Answers on a post card please..............

At home the horses seem to be making steady progress towards full health, its been hell and beyond frustrating but it is a process we are getting through, with it must be stressed, the support of our incredible owners.

Heavenly Pulse managed to run his best race yesterday at Catterick and earn a reprive while Duke of Freedom ran well, eas only beaten three lentghs and wasn't suited by the soft ground.