Two good performances yesterday by both our runners at Beverley. Two-year-old filly, Heartstring, running for only the second time, again showed plenty of promise to finish fourth. Though still a little green, she is a quick learner and once the penny has dropped fully and competing in handicap company, she will be seen to stronger effect. She is well related, a half-sister to mulitple winners including the 110 rated 'Dutch Masterpiece', and our own 'Hilary J'. She is a lovely first horse for new syndicate DGA Racing, who also enjoyed a great debut from the leggy 'Up The Millers'. Hopefully, these first time owners will find themselves in the winners enclosure during their debut season. Shares are available in both horses so if you have an interest, do get in contact via their website linked above.

Arnold promised 'he'd be back', and he made the return to the East Riding track a winning one. Tucked in on the rail behind the leaders, Joe Fanning gave him a very cool ride, content to wait for a gap to open up. Luck was on our side for open up it did, but Arnold had to show real tenacity to push himself through, extending all the way to the line to peg back long time leader and course specialist Bondi Beach Boy. Ann told the Racing Post, 'Arnold is a great big horse and he's his own worst enemy because he's very bolshie at times, he can get a bit fractious in the stalls. His owners have been very patient. He's got plenty of speed for a big horse and he won from a dreadful draw on the wide outside the last time he came here. I doubt he'll run tomorrow, that was an insurance policy in case they had heavy rain today'.

Sandra and Derek Shewring, despite living in Essex, rarely miss a race in which one of their horses is running, no matter how far north they have to travel (Troop won at Hamilton). Happily, they were there again yesterday to see their boy score and I'm sure the finish was both nail biting and thrilling. Shareholder Barrie Craig was sadly unable to attend, but during his 2.5 years as an owner at Sun Hill he has been extremely lucky, enjoying wins from My Amigo, Cuppacoffee, Troop and Arnold. He emailed Anna yesterday, delighted of course that Arnold had won again, and had a proposal for us, saying 'I think Ann should give me a 1% share in all the horses...' - perhaps we may need to take his tongue-in-cheek proposal rather seriously! 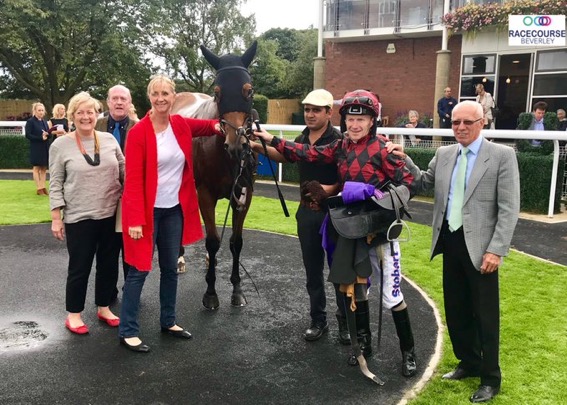