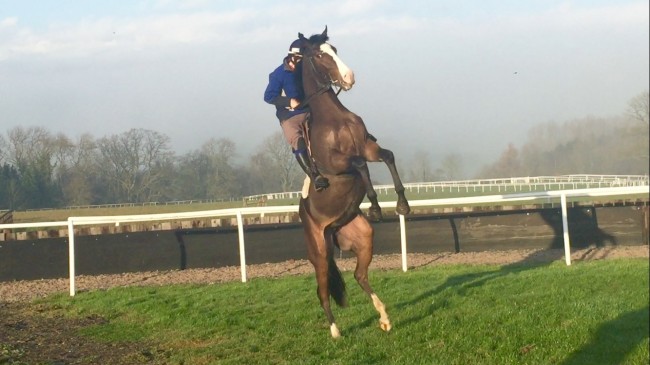 Peach Pavlova ridden by Rowan. Should the biscuits ever get the better of him, I'm sure he could forge a career as a stunt rider!

It would seem that young Mr Scott has a penchant for frisky fillies! You may remember the photo of Rowan impressively clinging on to a cheeky Poppy Pivot, who decided that mid yearling parade was the perfect opportuinty to 'shake hands' with him and introduce herself to everybody. Well today he had another chance to demonstrate his horsemanship, maintaining the partnership between himself and the rearing 'Peach Pavlova', in remarkably stoic fashion, this time whilst on the horses back! Having been ridden away for a couple of days by PJ (who was away racing and would otherwise have had the pleasure), Rowan took over the job of riding the three fillies that are being broken in here at the yard. Three very different characters that proves that each horse has a personailty and must be treated as an individual and not simply like a machine; Poppy Pivot behaved herself very well, the Tamayuz filly demonstrated that she's just a tad apprehensive whilst in the early days of being ridden, whereas Peach Pavlova, who has a lovely active walk, isn't actually afraid of anything and is probably just a little bit stroppy - which is fine as we've done very well with some stroppy fillies in the past and we certainly don't discriminate against strong-willed 'mares' here!

Please see the video below, where Rowan's circus training can be viewed in its entirety.

Fruity by name, fruity by nature - PEACH PAVLOVA from Ann Duffield on Vimeo.

More Info
New faces
We've got two exciting new additions to the yard, sourced from the breeze up sales earlier in the week. First up, a lovely filly by Showcasing. See he...
04-07-2020
Read more...
Hot Cuppacoco...in this weather?!
A glorious couple of days in North Yorkshire, with the sun splitting the rocks today especially. Our recent runners enjoyed a relaxing morning in the ...
24-06-2020
Read more...
Morning video
...
17-06-2020
Read more...