When you've had a remarkable career spanning 40 years and have enjoyed over 2,500 winners, I would imagine it takes something really special to 'stand out' as a personal high, but winning the Nunthorpe on Pivotal is certainly up there for George. One of Sun Hill's holiday lodges is even named after the horse. George describes him as 'a lovely, lovely horse. I never saw him put a foot wrong, at home or away. A gentleman. He was always good, right from the begining and I don't think we saw the very best of him'. 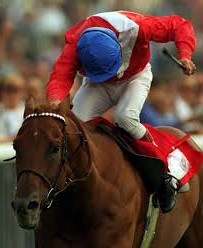 This morning, I typed '1996 Nunthorpe' into google and 22 years after the occassion, watched the race with the winning jockey, who reflected upon the 20 minute wait they had to endure as the stewards deliberated the winner, after an agonisingly close finish. The race was the last race Pivotal would run and is a brilliant depiction of GD's strength in the saddle. George is adament that we did not see the best of Pivotal, and had he remained in training as a 4-year-old rather than heading to stud, would've had a serious chance of winning all the big sprints.

George also touched upon Pivotal's stud career, 'a phenomenal sire that has bred Classic winners, sprinters and stayers and was no flash in the pan - he has been at the top of the game for years and years'.

There's a lovely piece in today's Racing Post about Cheveley Park's former high-class sprinter, launding his efforts as a top-class sire of broodmares with back-to-back Group 1 winners on Sunday.

"The 25-year-old's influence was felt across the length and breadth of the racing world this weekend, with his talents best advertised by back-to-back Group 1 winners as damsire at Longchamp on Sunday. The first leg of the brace was brought up by Mabs Cross, who gained due compensation for an agonising near miss in the Nunthorpe Stakes by prevailing in a busy finish to the Group 1 Prix de l'Abbaye de Longchamp. The four-year-old filly is by another Cheveley Park resident in Dutch Art - who has supplied two previous Group 1 winners, namely Garswood and Slade Power - and is the sixth foal out of Pivotal's daughter Miss Meggy. The Prix de l'Abbaye was followed by the Qatar Prix de la Foret, which went the way of One Master, a daughter of the Pivotal mare Enticing and Coolmore's flagship shuttle sire Fastnet Rock, now the source of 36 elite winners. One Master was bred by Lael Stable out of dual Group 3-winning sprinter Enticing, a daughter of William Haggas's high-class juvenile talent Superstar Leo, who was sourced by the trainer's wife Maureen for a mere 3,400gns at Tattersalls back in 1999.

These results have helped consolidate Pivotal's lead at the head of the European broodmare sires' table, having gone into Sunday already more than £500,000 clear of his nearest rival, Galileo.

Barely a week has gone by in the 2018 season without Pivotal's talents as a broodmare sire being advertised in major races."